Beihai 北海, is located at the southern end of Guangxi. It officially became an international tourist spot in 1982 i.e. the Chinese opened it up to foreign tourists, although you wouldn’t know it! Researching this place to decide where to stay was hard to say the least, it just isn’t visited very much by westerners. I knew we were taking the less common route, but didn’t realise quite how off the tourist path we were, until it became blatently obvious that we were the only westerners in town.

The shop signs here are all bilingual, in Chinese and Vietnamese, which makes sense as we are only 150km from the border,  and judging by the scenery and vegetation, it definitely feels like we are getting closer to Vietnam. Beihai City has a population of approximately 1.69 million people, so it feels like a seaside village. The property craze started here in the 90s, however the property bubble burst after government intervened by imposing restrictions. Now there is a landscape of abandoned buildings and it is quite apocalyptic in some parts of town. 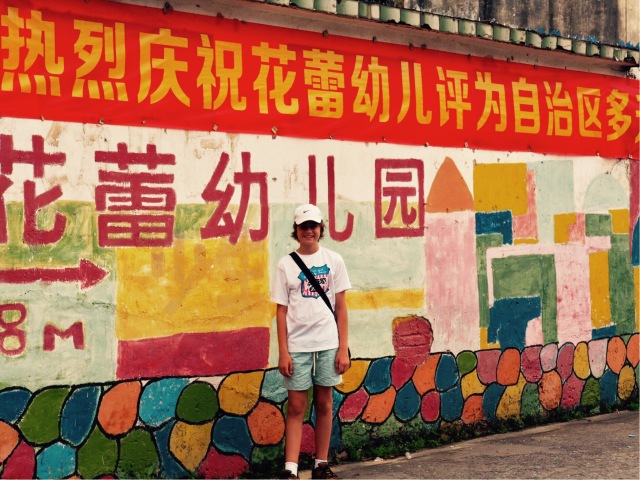 Arriving early evening on our first night meant finding somewhere to eat first and foremost. Locals enjoy staying up late here and one of the best things to do in Beihai is just to wander around streets with food and market stalls. Anyone I asked about food was insistent we head to the new shopping centre – Wanda Plaza, in town. Normally we would avoid this at all costs, however we hadn’t seen anything promising on our way in and it was late… Amazingly there was a huge amount of choice, and all local restaurants, not a chain in sight. Robin was desperate for a steak, as every meal so far had been very pork based. There is cheap seafood everywhere here, at about half the price of Shanghai. I had also been told when ordering anything with meat in a restaurant, there is a chance of getting rat meat although you ordered beef, so I went for fish!

Silver Beach 银滩 was our first stop the next morning. It is a long beach of 24 km with soft white sand and gentle surf. The Chinese call it ‘No.1 Beach under Heaven’. I’m not sure it’s quite of that status but still it’s a nice place to spend a day. The water was beautifully warm but very few people were swimming apart from us, however we’re used to getting stared at in China now….

Old Street, or Zuhai Pedestrian Street 珠海路步行 was where we headed for our second evening in town. The street is famous for its old colonial buildings, which are unfortunately rotting away as renovation efforts have centered around the ground floor businesses.  Traffic is restricted to scooters and e-bikes, which quite frankly are a pain in the neck with so many people walking around.

This street and the surrounding area are the original sites of the first Western trade centres in Beihai. The street is filled with locals and visitors from late afternoon until midnight. We had an amazing seafood meal here for $30 AUD, which involved lots of charades and pointing to order!

Tomorrow we are off bright and early to Guilin via the fast train!