The first few hours in Ho Chi Minh City gave us the jitters especially with the kids in tow.

Oliver’s road sense being non existent and the locals taking the attitude of step out in the traffic, act nochalant and don’t stop, gave us both quite a few heart stopping moments! We soon realised that Jemima probably had the best attitude, being totally unfased by it all – she was more worried about the heat.

The old quarter of Ho Chi Minh was where we found ourselves after checking into our lovely hotel – Beautiful Saigon Hotel. This area with its narrow

winding streets & ramshackle houses is a far eastern equivalent of Dickensian England. Despite protests from Oliver that we were going to be lost for all time, we always managed to pop out from the depths of the maze quite close to our destination. He now thinks his mum is a genius when it comes to navigation!

So far first impressions have revealed a frenetic paced city that retains an old fashioned gentle side to it’s nature. The people have a genuine regard for others, that reveals itself in kindness and a joy of life that is heartwarming. This of course doesn’t mean that the taxi drivers are any less likely to scam you if they can – they just do it with a smile and a giggle!

Monsoon season has shown itself – although not as oppressively hot as it can be, we have certainly seen some rain every evening.

With everyone still on Sydney time our first full day saw us up at 6am ready to go. First stop Ben Tanh markets – a bit touristy this market has everything and more… fresh vegetables to the ubiquitous tshirt and power tools! Luckily none of us suffer claustrophobia as it is a bit daunting squeezing down narrow aisles past product displays and bustling patrons, while being yelled at from every angle.

After escaping the market place we moved on to Bitexco Financial Tower. Standing right at the heart of the city’s Central Business District it defines the skyline of Ho Chi Minh City. 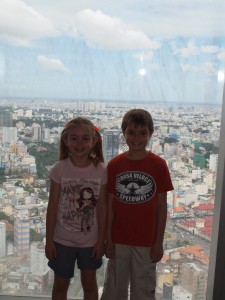 At 262 umeters, it is Ho Chi Minh City’s tallest building. The skydeck gave us an amazing view of the city and we were lucky enough to have a private tour with a guide pointing out the sights as the building is still being completed & we were the only ones around.

Robin & Oliver had spotted a street hawker making up hot ham rolls across the road from the tower. With the boys happily munching away, (this food stop was the first of many during our jaunts through the city – the smell of hot french bread can become overwhelming!) we continued on to Notre Dame Cathedral & the War Remnants Museum. This place highlights the horrors of modern combat, and portrays the suffering inflicted on the Vietnamese people during the Vietnam War.

Robin really wanted to go here, I wasnt so sure if the kids should be exposed to it at all, however they took it in their stride and as kids do only took in what they could cope with and were oblivious to the rest.